A.I.M. Drone is an Enemy from Marvel's The Avengers, first appearing in Disney Infinity 2.0.

Where to find in the Toy Box Editor:

They appear as Enemies in the Marvel's The Avengers Play Set and the Assault on Asgard Toy Box Game.

The drones' only attack is via the guns on either side of their bodies. The drones are fast and their guns are powerful, but the robots themselves are very weak; any hit will defeat them. In the Play Set, the drones appear in the same places as Frost Giants and fight alongside them. They are supposed to be working for M.O.D.O.K. 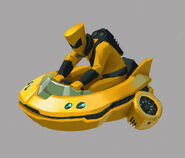 Concept art of an early version of the drone with a pilot.
Add a photo to this gallery

Retrieved from "https://disneyinfinity.fandom.com/wiki/A.I.M._Drone?oldid=141760"
Community content is available under CC-BY-SA unless otherwise noted.