Agent P (alias of Perry the Platypus) is a character from the Disney Channel Phineas and Ferb TV series. He may be used in:

"Agent P & The Infinity-inator" is added to the Disney Infinity 1.0 Adventures menu when the figure is placed on the Disney Infinity Base. He was exclusively released at GameStop March 14, 2014[2], with his official release on April 1, 2014[3] with Phineas Flynn as a single character, and in the Phineas and Ferb Toy Box Pack.

In the first edition, Perry's Default Pack is "Platypus Pummel" (a melee combo) and his default Tool is his Flying Fedora, which he can throw at enemies and have it return to him like a boomerang. He also has a Block Breaker and a Power Attack. When he dodges, he does flips and handsprings.

In the second edition, Perry retains his abilities from the original game, and gains Regenerating Shields. His Special Abilities include "Heightened Senses", "Marksman", "Super Jumper", and "Tech Specialist". 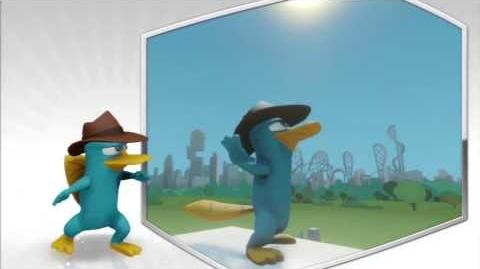