Disney Infinity Wiki
Register
Don't have an account?
Sign In
Advertisement
in: Disney Infinity 3.0, Available in 3.0, Star Wars: Twilight of the Republic,
and 6 more

Anakin Skywalker (aka General Skywalker) is a character from the Lucasfilm Ltd. Star Wars film series. He may be used in:

He is sold in the starter pack of the game, as well as with the Star Wars: Twilight of the Republic Play Set; and was available at launch. He was confirmed playable on Toy Box TV,[3] but was first seen with the leaked images of the Disney Infinity 3.0 starter pack.[4]

Anakin fights using his blue lightsaber, and has an aggressive combat style.[5] He is Force sensitive, and as such possesses all basic Force-related abilities, along with some others unlocked via his Skill Tree. These include a Force Finisher called Anakin's Fury, which causes Anakin to make a flurry of attacks during his Force Dash; and Power of the Force, which causes Anakin to use the Force to pull enemies toward him and then throw them out in all directions. His other abilities abilities include a Super Jump, a Block Breaker, an Air Assault, and the ability to deflect blaster shots with his lightsaber. His Special Move is Sense Your Surroundings, which causes him to rip up a portion of the ground and throw it at nearby Enemies.

For more quotes from this character, see Anakin Skywalker/Quotes. 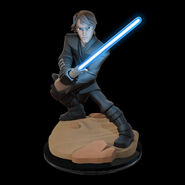 Anakin fighting against General Grievous with surrounding MagnaGuards in the Star Wars: Twilight of the Republic Play Set.