Start a Wiki
"She may be the younger princess, but when it comes to being courageous, she knows how to take charge!"
--Hall of Heroes statue inscription

Anna (aka Princess Anna) is a character from the Walt Disney Pictures Frozen movie, and is included in the Frozen Toy Box Pack. She may be used in:

She was released along with her older sister Elsa on November 26th[2]shortly after the film's release in the Frozen Toy Box Pack, as well as the second series of Power Discs. She was released by herself in March 2014.

Anna has the ability to use the Climbing Hook, which is similar to Mrs. Incredible's stretching power. She also uses a shovel for melee combat.

Anna has her own Adventure called Anna's Chilling Challenge. Anna's Character Chests unlock her costume, her Climbing Hook, and the Olaf Costume.

For more quotes from this character, see Anna/Quotes. 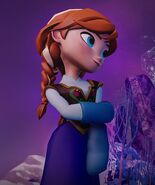 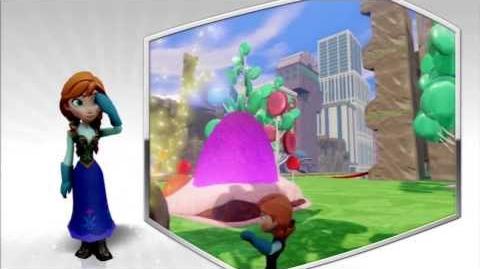