Arlo is only available in Disney Infinity 3.0.


He was originally confirmed by a leak. It was later confirmed he would be a Power Disc as part of the The Good Dinosaur Power Disc Pack.

Before being pitched as a mount, Arlo was intended to be a playable character, but he was changed to being a mere mount because one of Disney's higher ups ("a certain director", according to Bryan Allen; probably John Lasseter) thought that The Good Dinosaur was not going to be very well received.[2][3]

Concept art of Arlo and his figure 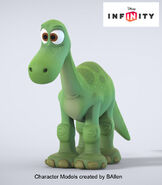 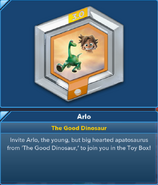