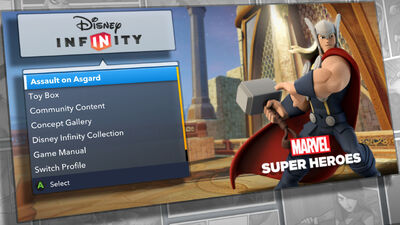 Loki has opened a portal to Asgard, allowing Frost Giants in to finally give Loki the throne!

Assault on Asgard is a Defense based Toy Box Game. It is available in the Disney Infinity 2.0 Starter Pack. You can use any Marvel Super Heroes character and all of their abilities in this Toy Box Game.

As you gain cash by killing Frost Giants, buy sentry guns and other obstacles that will make it harder for Frost Giants to get past.

Thor in the game

Drax, Iron Fist, and Nova in the game

Iron Man in the game
Community content is available under CC-BY-SA unless otherwise noted.
Advertisement