Start a Wiki
Avatar Vault is only available in Disney Infinity 1.0. It is similar to but larger than a Character Chest.

To open an Avatar Vault, every character playable in a Play Set must interact with it. Once opened, it always gives a Prebuilt Toy Box themed after the Play Set. It also provides either the corresponding Skydome and Terrain Set, or a preset selection of other toys. It also randomly provides some of the toys that are also randomly distributed by the third chest of a given character.

Neither Avatar Vaults nor Character Chests are available in other Editions. 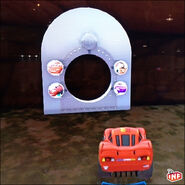 The Lone Ranger at the Lone Ranger Play Set vault
Add a photo to this gallery
Retrieved from "https://disneyinfinity.fandom.com/wiki/Avatar_Vault?oldid=133178"
Community content is available under CC-BY-SA unless otherwise noted.