Baymax is a character from the Walt Disney Animation Big Hero 6 movie. He may be used in:

He was confirmed by Walmart when they leaked him along with Hiro, Tinker Bell, and Donald by having pre-orders for them. He was hinted at at Comic-Con when Avalanche made a giant version of his figure [2]. He was officially announced on August 27, 2014 with Hiro in their trailer. Baymax was released on November 4, 2014.

Baymax uses karate moves for close combat. He can also shoot and charge his rocket fist for ranged attacks. He has the Maximum Strength and Flyer abilities.

For more quotes from this character, see Baymax/Quotes. 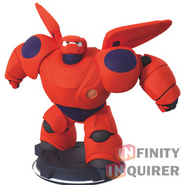