Are you looking for Obi-Wan Kenobi (Character Figure)?

Ben Kenobi appears as an NPC and a mission giver in the Star Wars: Rise Against the Empire Play Set.

His corresponding Cast Member can be unlocked in that Play Set for use in the Toy Box. Once unlocked, he can be found in the Toy Store under "Horseplay Toys" -> "Star Wars Cast Members".

Concept art of Mos Eisley with Ben in it.

Ben giving a mission to Sabine Wren in the Star Wars: Rise Against the Empire Play Set. 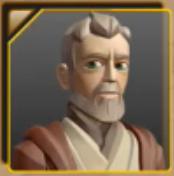 Ben's character icon.
Add a photo to this gallery

Retrieved from "https://disneyinfinity.fandom.com/wiki/Ben_Kenobi?oldid=131132"
Community content is available under CC-BY-SA unless otherwise noted.