Start a Wiki
"T'Challa of Wakanda leads his people and protects their chief resource: Vibranium!"
--Hall of Heroes statue inscription

Images of his figure were leaked by Amazon.com on October 13, 2015 alongside the long-rumored Ant-Man as well as Vision. On January 16th, 2016, another leak on the website of New York City-based photo and video equipment store, B&H Photo Video, showed off high quality versions of Black Panther, Ant-Man, Vision, the Marvel Battlegrounds Power Disc Pack, and Baloo.[1]

How about a little magic? This article is a stub. You can help the Disney Infinity Wiki by expanding it.

For more quotes from this character, see Black Panther/Quotes. 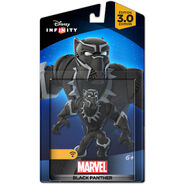 The image that revealed Black Panther as a playable character

Retrieved from "https://disneyinfinity.fandom.com/wiki/Black_Panther?oldid=132878"
Community content is available under CC-BY-SA unless otherwise noted.