Start a Wiki
Are you looking for Spider-Man?

Black Suit Spider-Man (aka Peter Parker) (alias Peter Benjamin Parker) is a character from the Marvel Spider-Man 3 movie. He may be used in:

He is the "iconic black symbiote costume" version of Spider-Man.[1] He first appeared as part of the Disney Infinity 2.0 Starter Pack for the Playstation Vita. It was later confirmed as a single figure release for Disney Infinity 3.0 and Marvel Battlegrounds.[2][3]

For more quotes from this character, see Black Suit Spider-Man/Quotes. 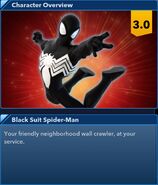 Character overview as seen in 3.0

Black Suit Spider-Man in the Hall of Super Heroes, with the symbiote "goo" around the base of the Spider-Man statue 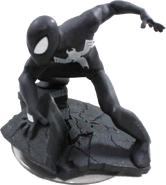 character figure
Add a photo to this gallery

Retrieved from "https://disneyinfinity.fandom.com/wiki/Black_Suit_Spider-Man?oldid=140403"
Community content is available under CC-BY-SA unless otherwise noted.