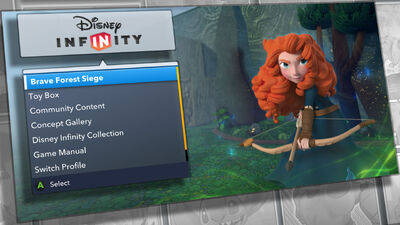 Merida's brothers have stolen the Witch's cakes. Collect them all before her bear carvings do.

Brave Forest Siege is a Toy Box Game in Disney Infinity 2.0. It is available in the Toy Box Starter Pack, but is also sold separately with Stitch's Tropical Rescue since January 2015. It's based on the Pixar film Brave, and features Merida on the power disc.

An additional feature in Brave Forest Siege is the ability to recruit Sidekicks, which help players defeat enemies, find treasures, and trigger actions.

The gameplay style is similar to Escape from the Kyln, which also includes the ability to recruit Sidekicks.

There are eight DunBroch Forest areas where the player needs to search for the Witch's DunBroch Pastries. Each unlocks in order as the previous one is completed.

The starting area for each includes a DunBroch Sidekick Outfitter to allow for a last minute change of gear before starting, and two of the following three items:

Sidekick Doors are used by picking up the Sidekick and tossing it at the door. They may award a Spark capsule, a DunBroch Collectible, or may explode and produce an enemy. Each also has a Detection Level[2] assigned to it, and the Sidekick must have a high enough Seek level (on their own or through the use of additional Sidekick Gear) in order to use them.

Treasure Chests are opened by hitting them. Each may award Sparks or a DunBroch Collectible.

There are two different types of Pressure Plates:

When the character reaches the exit upon completion of a level, each DunBroch Collectible found may award either a random piece of Sidekick Gear, or blue Sparks if the Sidekick Gear it would have awarded has already been unlocked.

Completing all eight DunBroch Forest areas unlocks the Exploration Survival Mode Door. This game mode is based on the Brave Forest Siege game, but has fifty (50) randomly generated levels. Features include:

Merida's brothers stealing pastries from the Witch in the introduction

Iron Man in Exploration Survival Mode on Xbox One X