Not to be confused with: Butch Cavendish

Butch is a character in the Disney/Pixar film The Good Dinosaur. He is a T-Rex, and appears as a mount in Disney Infinity: 3.0 Edition. He was confirmed at the 2015 D23 Expo as a part of the The Good Dinosaur Power Disc Pack. He is the largest mount in the game so far. He has a roar attack. 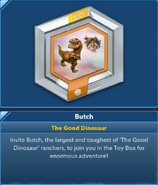 Add a photo to this gallery
Retrieved from "https://disneyinfinity.fandom.com/wiki/Butch?oldid=119945"
Community content is available under CC-BY-SA unless otherwise noted.