Buzz Lightyear is a character from the Pixar Toy Story, and is included in the Toy Story in Space Play Set. He may be used in:

Buzz Lightyear was released on October 22nd as an expansion character. An Infinite Crystal Series figure of Buzz was released on November 3rd exclusively at Toys "R" Us in the Race to Space pack, along with a crystal version of Lightning McQueen. His adventure is "Buzz Lightyear, Save Me!". A glow-in-the-dark version of Buzz Lightyear was available to purchase on the Toy Box App for iOS and PC, but does not have an actual figure; however, it has its own statue outside the Hall of Heroes. Unlike Syndrome already having his Zero Point Energy Gauntlet, Buzz Lightyear must first buy his jetpack in the Toy Story in Space Play Set.

Like Woody and Jessie, he throws a Pixar Ball and performs shoulder charges. His Special Abilities include "Marksman", "Super Jump", and "Tech Specialist".

For more quotes from this character, see Buzz Lightyear/Quotes. 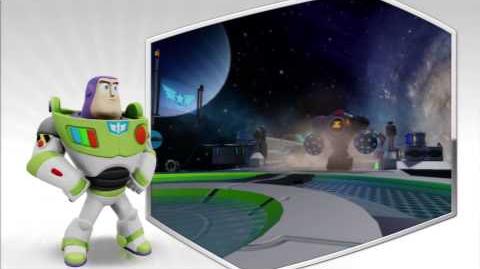