Chill in the Air is a Hexagonal Power Disc which, when placed on the Disney Infinity Base, allows the player to change the Skydome in the Toy Box.

It was released as part of Series 2, along with a Texture Set, Anna, and Elsa in the Frozen Toy Box Pack.

For more game related media, see Chill in the Air/Gallery. 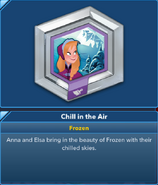 Anna with the sky in the background.

Anna, Elsa, and Vanellope with the sky in the background.
Add a photo to this gallery

Retrieved from "https://disneyinfinity.fandom.com/wiki/Chill_in_the_Air?oldid=145464"
Community content is available under CC-BY-SA unless otherwise noted.