The Condor Wing Glider, also known as the Condorman Glider, is a Power Disc of a wearable pack which appears in Disney Infinity and it's sequels. It is used by Condorman in the 1981 film of the same name to help assist a female Soviet KGB agent defect to the United States. It works similarly to the Glide Pack. This was released in Power Disc Series 2. Condorman's wings and mask are pictured on the Power Disc.

If you like condors and flying gracefully then this will be your favorite Power Disc. 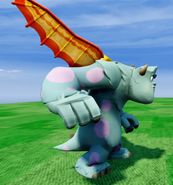 Add a photo to this gallery
Retrieved from "https://disneyinfinity.fandom.com/wiki/Condor_Wing_Glider?oldid=101908"
Community content is available under CC-BY-SA unless otherwise noted.