Start a Wiki
D23 Expo is an official event held every two years by the D23, the official Disney fan club.

Disney Infinity made its first D23 appearance in 2013. On August 11th, 2013 from 12 to 1:30 pm, there was a showcase of Disney INFINITY where developers unveiled Sorcerer's Apprentice Mickey Mouse, the Toy Story in Space Playset, Perry the Platypus, Phineas, Vanellope, Wreck-It Ralph, Jack Skellington, Rapunzel, Anna and Elsa. D23 members were then given a free exclusive Sorcerer Mickey Mouse figurine. 5,000 of these figures were given out.

The 2015 Expo was held August 14-16, 2015. Disney Infinity once again presented at the 2015 Expo. Attendees were given an exclusive gift that will not be available in retailers. [1] The 2015 Toy Box Summit was three days before the start of the event at the same venue. On August 8, 2015, the official Disney Infinity Twitter account revealed that three new Disney Originals Playable Characters would announced for Disney Infinity 3.0 on the 16th, the last day of the convention.[2] Those were confirmed to be Judy Hopps, Nick Wilde and Spot, along with Peter Pan as the chosen character by the Toy Box Artists for 2016,[3] and Power Discs for The Good Dinosaur and Zootopia. The name of the Marvel Comics play set was also revealed to be Marvel Battlegrounds, and special figures of Star Wars characters with glowing lightsabers were confirmed along with Finn and Rey. A Magic Band would unlock the Walt and Mickey statue.[4][5] On August 12th, 2015, they announced that on that same day, they would reveal the ultimate pack for Disney Infinity: 3.0 Edition. [6] It was confirmed to be the Keyblade, and a Power Disc that has the King Mickey outfit was also given to only the people who attended the D23 Expo.[7]

Seating at the presentation

All of the second wave figures (except Rapunzel). 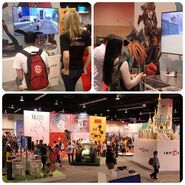