Start a Wiki
"As far as Phineas and Ferb are concerned, this sky is the limit!"

Danville Sky is a Hexagonal Power Disc which, when placed on the Disney Infinity Base, allows the player to change the Skydome in the Toy Box .

It is one of the Power Discs found in the Phineas and Ferb Toy Box Pack. Various trees can be seen, along with Doofenshmirtz Evil Incorporated and the "Coolest Coaster Ever"[1] from the pilot episode. 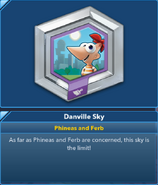 "Danville Sky" in the Toy Box

Phineas with the Skydome in the background.
Add a photo to this gallery

Retrieved from "https://disneyinfinity.fandom.com/wiki/Danville_Sky?oldid=132427"
Community content is available under CC-BY-SA unless otherwise noted.