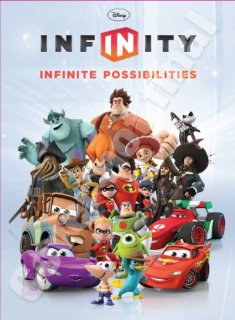 "This 80-page companion book to the highly anticipated Disney Infinity video game will introduce players to the beloved Disney and Pixar characters and worlds featured in the game. Players will learn all about their favorite characters, including Captain Jack Sparrow, Sulley, Lightning McQueen, and The Incredibles.

In addition, this first companion book will explore all six initial Play Sets, such as the worlds of Monsters University, Pirates of the Caribbean, and Cars, as well as provide tips on building entire worlds in the Toy Box mode straight from the game's creators!"[4]

Retrieved from "https://disneyinfinity.fandom.com/wiki/Disney_Infinity:_Infinite_Possibilities?oldid=107044"
Community content is available under CC-BY-SA unless otherwise noted.