This page is a candidate for deletion.

Reason: content should probably be moved to appropriate articles/categories and this article removed, as "not an official term used by Disney" and therefore not relevant to game

If you disagree with its deletion, please explain why on the article's talk page or improve the page and remove the {{delete}} tag.

Remember to check what links here and the page history before deleting.

The Disney Universe is a fictional universe where some cartoon characters created by the The Walt Disney Company live, the most famous of which is Mickey Mouse. It is coexistent with the Duck Universe, a spin-off of the Mickey Mouse universe which centers around Mickey's friend Donald Duck and his rich uncle Scrooge McDuck. "Mickey Mouse Universe" is not an official term used by Disney. 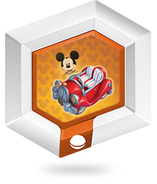 Mickey's Car being driven by Sulley. 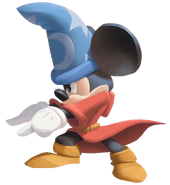 Concept art of Sorcerer Mickey.
Add a photo to this gallery
Retrieved from "https://disneyinfinity.fandom.com/wiki/Disney_Universe?oldid=128946"
Community content is available under CC-BY-SA unless otherwise noted.