Drax (aka Drax the Destroyer) is a character from the Marvel Guardians of the Galaxy. He may be used in:

Drax is mainly a light shade of green with red lines all over him. He wears red pants and black boots.

He uses his two daggers to attack enemies. He has a Super Jump abiltiy.

Drax's Skill Tree is, like all the other playable characters', divided into branches that improve different abilities. Following is a list of all the upgrades in the four different branches in Drax's Skill Tree, plus the 2 Respenders.

For more quotes from this character, see Drax/Quotes. 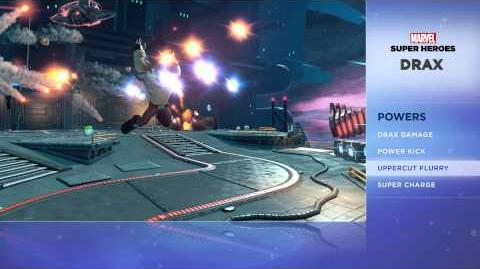 Retrieved from "https://disneyinfinity.fandom.com/wiki/Drax?oldid=145336"
Community content is available under CC-BY-SA unless otherwise noted.