Start a Wiki
Elsa's Ice Palace is a Set Piece set to appear in Disney Infinity: 3.0 Edition.[1] It originates from Frozen and can only be unlocked through the Toy Box Speedway. being the place that Elsa makes to live in after her powers of ice and snow were revealed to the citizens of Arendelle.

In the game, there's a button on the side of the palace that makes snowflake fireworks and a storm cloud up above it.

It is obtained by completing all 3 Grand Prix in first.

The ice palace as it appears in Frozen 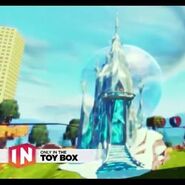 Add a photo to this gallery

Retrieved from "https://disneyinfinity.fandom.com/wiki/Elsa%27s_Ice_Palace?oldid=109410"
Community content is available under CC-BY-SA unless otherwise noted.