Disney Infinity Wiki
Register
Don't have an account?
Sign In
Advertisement
in: Disney Infinity 2.0, Available in 2.0, Toy Box Games, Guardians of the Galaxy 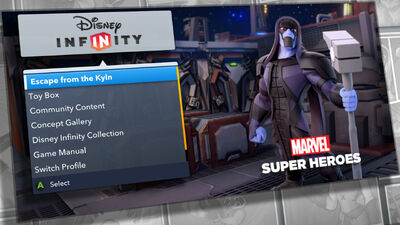 Escape from the Kyln is a Dungeon Adventure type Toy Box Game based on Guardians of the Galaxy, and is available in the Disney Infinity 2.0 Starter Pack. All Marvel Super Heroes figures and their abilities can be used.

In Guardians of the Galaxy, The Kyln is the prison that Star-Lord, Gamora, Groot, and Rocket Raccoon are held in before they escape with Drax. Ronan also appears at the Kyln in the movie, which may explain why he is on the Toy Box Game disc.

An additional feature in Escape from the Kyln is the ability to recruit Sidekicks, which help players defeat enemies, find treasures, and trigger actions.

The gameplay style is similar to Brave Forest Siege, which also includes the ability to recruit Sidekicks.

For more game related media, see Escape from the Kyln/Gallery.