Falcon (alias of Samuel Thomas Wilson) is a character from the Marvel Captain America series. He may be used in:

He was revealed to be playable when someone got hold of Disney Infinity 2.0 early and found him in the Hall of Heroes.[2][3]. He was released on March 24, 2015 [4]. He has a Costume Change Power Disc called Ultimate Falcon that lets him change into his Captain America: The Winter Soldier/Ultimate Marvel outfit.

Falcon uses powerful kicks and punches for close combat. For ranged attack, he throws projectiles known as "Hardlight Feathers". He has the Flight ability.

When Avalanche began working on a figure of Falcon, Disney suggested that they use his Ultimate Spider-Man design rather than his outfit from Captain America: The Winter Soldier. While many of the development team, including Jeff Bunker, wanted to use his Winter Soldier outfit because they thought it looked cool, they realized that if they were going to make play sets based on the Marvel animated TV shows, then they needed to use Falcon's design from the shows or it would not fit in with the rest of the Characters. They also felt that the TV version of Falcon's costume was more iconic, and better represented the character. However, because the team liked the designs that the team had come up with for a Winter Soldier design for the costume, they made it into a costume change power disc for the character.[5]

The team found Falcon's Wings a particular challenge to design. They tried two different designs for them: one made the wings come from a Pack on his back, and the other had them attached to his arms. The team decided on the former design because they wanted the wings to look like wings from all angles.[5]

The translucent red material used for Falcon's wings on his figure were something never before used for a Disney Infinity figure, and according to Jeff Bunker, they required a lot of extra research and development to be able to make successfully.[5]

For more quotes from this character, see Falcon/Quotes. 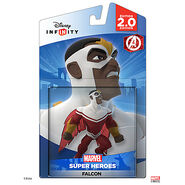 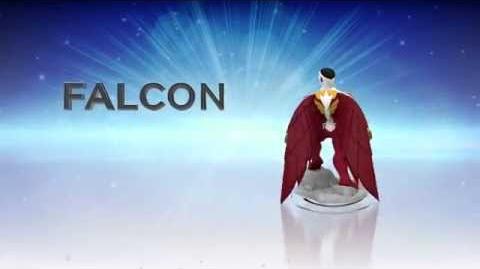 Retrieved from "https://disneyinfinity.fandom.com/wiki/Falcon?oldid=140843"
Community content is available under CC-BY-SA unless otherwise noted.