Falcon's Wings  is a power disc in Disney Infinity 2.0. It is used by the superhero Falcon in Marvel Comics to allow him to fly. It is also Falcon's default pack.

You'll be soaring when you put on Falcon's Wings!

The team found Falcon's Wings a particular challenge to design. They tried two different designs for them: one made the wings come from a Pack on the character's back, and the other had them attached to the character's arms. The team decided on the former design because they wanted the wings to look like wings from all angles.[1] 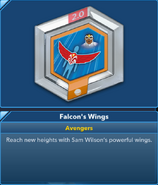 Hall of Heroes Image from Version 3.0