Owners of Disney Infinity figures that wish to display them on a bookshelf or other location have several options for doing so. They are generally divided into two categories: long-term storage and active storage. The latter refers to cases where the figures are intended to be put in and removed frequently as you play the game. 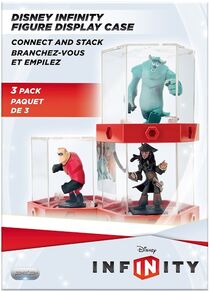 The standard method of displaying a figure is the Disney Infinity Figure Display Case. They are sold in sets of three for approximately $15.00. Each set contains three pieces: the two halves of the clear case and a base. The bases are designed to interlock with each other for stability and are stackable once assembled. The figures snap into the base very firmly, so it is recommended only to use the Display Cases as long-term storage. Care must be taken when removing a figure from the base to avoid the possibility of the clear disc mounted on the bottom of the figure separating from the figure itself.

The top of one of the clear plastic pieces is printed with the Disney Infinity logo in white on the top. The base is a solid red color. As of July 2015, the Display Cases are only available in the 1.0 color scheme, and are becoming harder to find at retail stores.

A few figures have been sold with a special edition Display Case. These are typically exclusive to a particular retailer and feature custom graphics on the back half of the display case. The special editions released so far include:

The white Disney Infinity logo that is printed on the top of the back half of the clear case for Captain America, Rocket Raccoon and Nick Fury is accompanied by the Marvel Super Heroes logo.

A few members of the Disney Infinity fans have come up with artwork that can be inserted into the back of the display cases. Some of these can be found at places like the customs and the collections, customs and fan art forums on the InfinityFans.com website. One example is the background inserts for Wreck-It Ralph and Vanellope von Schweetz, which also showed how the plastic case was modified to show Ralph had punched through the side of the case. 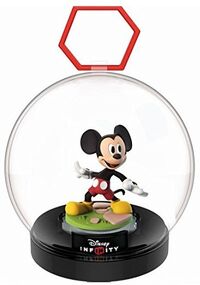 For Disney Infinity 3.0, a different style of display case was released. It is a clear plastic globe with a round base that will fit all of the Disney Infinity figures, including the larger ones like Hulkbuster. The Infinity hexagon is used as the carrying handle, which can also serve as a place to attach a hanger and turn the globe into a Christmas tree ornament. Unlike the 1.0 display cases, the Globe is sold one per package.

Storage options that are designed to be used while you are playing the game include the following:

Play 'N Store: Comes in two pieces, a white and a gray base that are stackable. The Disney Infinity Base is designed to slide into the slots at the top of the pieces, but will not fit well if the Base Protector has been snapped onto the Base. At one point, a second version in transparent red and smoke gray was supposed to be available but may not have been actually released.

Each of the two pieces can hold up to five figures, depending on the size and shape of each figure. Originally retailed at approximately $20.00 but can currently be purchased at GameStop for $5.97.

Play Zone: A carrying case with a pouch for the Game Base and three padded section that can hold figures and Power Discs. More information is available on the Figure Carrying Cases page.

Retrieved from "https://disneyinfinity.fandom.com/wiki/Figure_Display_Cases?oldid=114077"
Community content is available under CC-BY-SA unless otherwise noted.