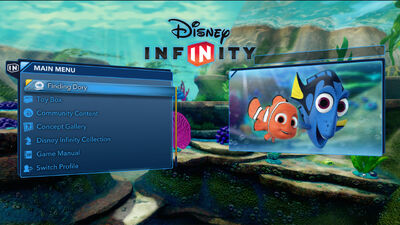 After hearing about an unexpected flood at the Marine Life Institute, Dory, Nemo, Marlin, and friends rush to the aid of the lost fish to help them find their way to safety before the tanks are drained.

Cutscene 1: Nemo is looking for Dory. He finds her and is joined by his father Marlin, who exclaims to her when she swam behind him, and Hank. Dory tells everyone that she was talking to a sea creature about a Flood from the MLI. Everyone decides to go with her.

Cutscene 2: Everyone gets to the MLI safely. Dory sees some pipes but Hank grabs her and tells her that Bailey needs to scan the resolution with his echolocation. Bailey does so and realizes that the drains lead straight to the seagulls!

Cutscene 3: Marlin, Nemo and Dory get into the open ocean exhibit and Bailey tells them about the Toy Piranhas whilst Dory sees two and gets bitten by them.

Cutscene 4: Nemo and Dory come out seemingly the wrong pipe. Bailey tries asking them where they are. Dory and Nemo realize that they’re underneath Bailey as he tells them that the fish in the Touch Pool need saving. Dory, channeling her inner Dory, says, “To Quarantine!” to which Bailey corrects her.

Cutscene 5: Everyone makes it as the Toy Piranhas’ (and possibly Toy Eels') corpses got bitten by the seagulls. 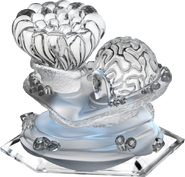 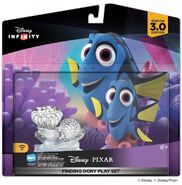 game hub area (before character loads or UI is drawn)

Retrieved from "https://disneyinfinity.fandom.com/wiki/Finding_Dory_Play_Set?oldid=136584"
Community content is available under CC-BY-SA unless otherwise noted.