Finn McMissile is an NPC and mission giver in the Cars Play Set in Disney Infinity 1.0.

Originally, Finn was conceived as a Playable Character, but was later changed to an NPC.[1] Based on some early concept art of the games (which depicts the characters and Finn on spy missions dodging missiles[2]), it is possible that the original version of the Cars Play Set was designed to be closer to Cars 2 than to the original Cars, but was changed after Cars 2 underperformed critically. 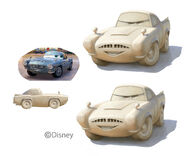 Finn McMissile appears as a playable character in the advertisement for the Cozy Cone Motel building.
Add a photo to this gallery

Retrieved from "https://disneyinfinity.fandom.com/wiki/Finn_McMissile?oldid=130167"
Community content is available under CC-BY-SA unless otherwise noted.