Start a Wiki
The Garden Ballroom is a Room that can be used in the INterior. It is unlocked in My INterior in Disney Infinity 2.0 and 3.0.

There are eleven plants with different symbols in front of them in the room. If the correct Disney Princess Costume interacts with the correct symbol, a new plant themed to the princess will appear. Beginning from the left side of the door and going clockwise around the room, the Disney Princesses and their symbols are:

Any of the Princess Costumes may appear at random if the Guest Gatherer is present and active. Otherwise, it is possible to manually place a Costume in the room from the INterior Townspeople group. Placing a Playable Character on the Disney Infinity Base will unlock the corresponding Costume.

The room seen from the inside, with the special plants unlocked. 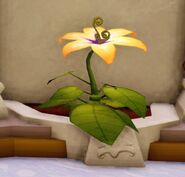 Magic Golden Flower after
Add a photo to this gallery
Retrieved from "https://disneyinfinity.fandom.com/wiki/Garden_Ballroom?oldid=131886"
Community content is available under CC-BY-SA unless otherwise noted.