General Grievous' Wheel Bike is a driveable Ground Vehicle that appears in Disney Infinity 3.0 as a Power Disc. It was initially revealed by a leak, but was later confirmed on Toy Box TV Live.[1] It was released in the Twilight of the Republic Power Disc Pack.

The bike rides basically the same as a typical motorcycle, operating off of the same mechanics. However, unlike most motorcycles in the game, it does not allow two players to ride at the same time. 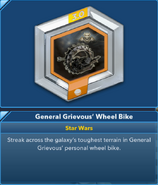 Hall of Heroes image from Edition 3.0 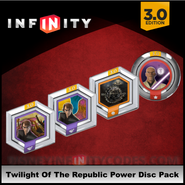 The bike in-game
Add a photo to this gallery

Retrieved from "https://disneyinfinity.fandom.com/wiki/General_Grievous%27_Wheel_Bike?oldid=145386"
Community content is available under CC-BY-SA unless otherwise noted.