Start a Wiki
"Everyone needs a dream. His is to defeat S.H.I.E.L.D. once and for all."
--Hall of Heroes statue inscription

Green Goblin (alias Norman Virgil Osborn) is a character from the Marvel Spider-Man series. None may be used in:

He appears in the Disney Infinity 2.0 trailer, being chased by Spider-Man. It was confirmed at Comic-Con he is playable in Wave 2, and was released in January 2015. [1]

Armed with Pumpkin Bombs, the brilliantly nefarious Goblin uses his Electro Shock Gauntlet to dispatch opponents handily in the world of Spider-Man. Super human strength makes him one fearsome villain and spectacular super jumps and the ability to charge his bombs into more powerful bolas all make him a villainous force to be reckoned with for both symbiotes and Super Heroes alike.

Green Goblin has Maximum Strength, the Villain ability, and can be upgraded to have a Super Jump.

For more quotes from this character, see Green Goblin/Quotes. 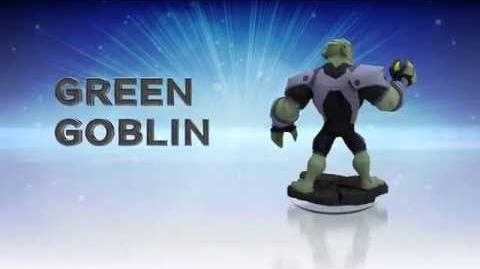 Retrieved from "https://disneyinfinity.fandom.com/wiki/Green_Goblin?oldid=132856"
Community content is available under CC-BY-SA unless otherwise noted.