The Green Goblin Glider is a Pack in Disney Infinity 2.0. It originates from Marvel's Spider-Man Play Set. When equipped, it allows the player to freely fly around on it. It also has cannons at the front that shoot green bursts of energy. It is unlocked automatically by taking ownership of a Green Goblin figure, and requires no further purchase to use. However, it was not available when the Green Goblin figure was first released, and required an update to the game to unlock, as with the Identity Disc from Disney Infinity 1.0.

The Green Goblin on the glider with Loki, Ronan, and Frost Giants. 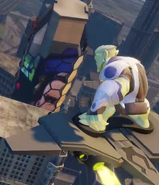 Goblin on the glider in the Play Set
Add a photo to this gallery
Retrieved from "https://disneyinfinity.fandom.com/wiki/Green_Goblin_Glider?oldid=134390"
Community content is available under CC-BY-SA unless otherwise noted.