Han Solo (aka Captain Solo, General Solo) is a character from the Lucasfilm Star Wars film series. He may be used in:

He is sold as a single figure, and was released on September 29, 2015 in the US. [1] He was confirmed to be playable on Toy Box TV.[2] Han Solo is also a Crossover Character, and can be used in any of the Star Wars play sets, once his Champion Coin has been collected in that set.[3]

Han's long range weapon is his blaster, and his melee attacks consist of a series of punches and kicks. A range of new attacks of both kinds is available via his Skill Tree; these include a Block Breaker, a more powerful block that repels the attacker, a blaster shot that temporarily stuns enemies, and a blaster shot which knocks enemies down. Also available in the Skill Tree are a Super Jump and a Cryoban Grenade which freezes enemies when it explodes. Han's Special Move, called Round of Rounds, causes Han to rapidly fire a slew of blaster shots out in front of him for as long as the special move button is held down.

For more quotes from this character, see Han Solo/Quotes. 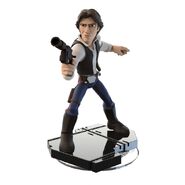 Retrieved from "https://disneyinfinity.fandom.com/wiki/Han_Solo?oldid=138743"
Community content is available under CC-BY-SA unless otherwise noted.