Hulk (alias of Robert Bruce Banner) is a character from the Marvel Hulk comics. He may be used in:

He was exclusively available in the PlayStation bundle at launch. Afterwards, he was released on October 28, 2014 as a standalone figure.

Hulk is one of the strongest characters in Disney Infinity. He uses this strength in his melee attack, where he forcefully punches and damages enemies. He can also do a running charge, where he runs against opponents and knocks them over. Hulk has Wall Crawl and Maximum Strength, and can be upgraded to have a Super Jump as well.

Hulk's Skill Tree is, like all the other playable characters', divided into branches that improve different abilities. Following is a list of all the upgrades in the four different branches in Hulk's Skill Tree, plus the 2 Respenders.

For more quotes from this character, see Hulk/Quotes. 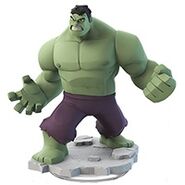