Start a Wiki
"Immortal Weapon on the outside, calm and cool on the inside."
--Hall of Heroes statue inscription

Iron Fist (aka Immortal Weapon) (alias Daniel Thomas "Danny" Rand-K'ai) is a character from the Marvel Iron Fist movie. He may be used in:

He, Nick Fury, and the Spider-Man Play Set were all leaked by a Target promotion.

He wears a green super hero suit, with a black design on the front. Iron Fist wears a yellow sash and face mask.

Iron Fist is skilled in martial arts, which is seen in his melee attack, where he attacks with powerful kicks and punches. He launches forward in his ranged attack, which can be upgraded to power up all his attacks for a short time is successfully charged. In Iron Fist's Special Move, he summons a dragon made of of fire and energy, called Shou-Lau the Undying. Iron fist can unlock the Super Jumper and Maximum Strength abilities in his Skill Tree, as well as a Healing Block upgrade.

For more quotes from this character, see Iron Fist/Quotes. 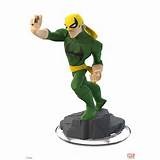 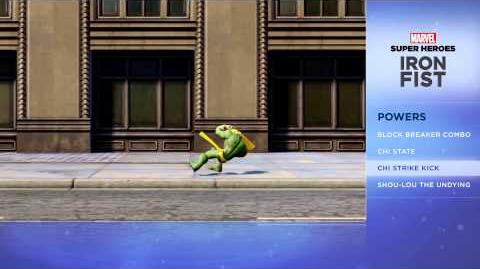 Retrieved from "https://disneyinfinity.fandom.com/wiki/Iron_Fist?oldid=129799"
Community content is available under CC-BY-SA unless otherwise noted.