View source
watch 01:36
We're Getting Mutants in the MCU - The Loop
Do you like this video?
Play Sound

Iron Man (alias of Anthony Edward Stark, aka Tony Stark) is a character from the Marvel Iron Man series, and is included in the Disney Infinity 2.0 Marvel Super Heroes Starter Pack. He may be used in:

He has a costume change disc called Stark Arc Reactor that gives him the Mark 42 suit.

Iron Man's armor allows him to fly and shoot Repulsor Blasts, which he both uses in close combat and ranged attacks. His Special Move is to shoot lots of missiles from his armor. Iron Man has the Flight and Tech ability.

For more quotes from this character, see Iron Man/Quotes. 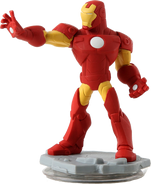