Jack Sparrow (aka Captain Jack Sparrow) (alias of Smith, Smithy) is a character from the Walt Disney Pictures Pirates of the Caribbean, and is included in the Disney Infinity Starter Pack. He may be used in:

Jack Sparrow was released on August 18th at launch.

Jack Sparrow has the same Basic Abilities as, and shares a number of Common Skills with, other playable characters.

Jack Sparrow uses Ranged style combat, relying on his Flintlock to deal damage to targets. His Special Abilities[3] include:

Skills for Jack Sparrow [4] include the following:[5]

Jack Sparrow does not have any Skills that use the Special Move meter.
For a complete Skill Tree, see Jack Sparrow/Skills.
For Disney Infinity 2.0 and 3.0, a Skill Tree calculator for Jack Sparrow can be found here.

"Infinite Jack Sparrow" is part of the Disney Infinity 1.0 product line, released as a special "crystal" (translucent) version of the character figure on November 15th exclusively on UK Amazon, and was released worldwide at Toys "R" Us later.

A Circular Power Disc named "Cursed Pirate Gold" is part of the Disney Infinity 2.0 product line. It changes his in-game appearance to his "undead" appearance (after having picked up one of the cursed gold coins) from Pirates of the Caribbean: The Curse of the Black Pearl.

For more quotes from this character, see Jack Sparrow/Quotes. 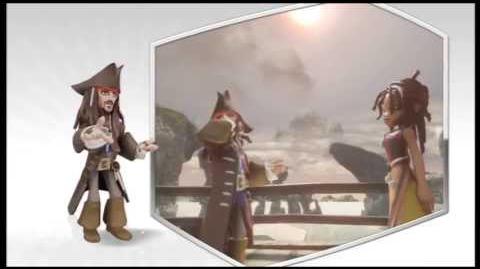 Retrieved from "https://disneyinfinity.fandom.com/wiki/Jack_Sparrow?oldid=140711"
Community content is available under CC-BY-SA unless otherwise noted.