Jar Jar Binks is a protagonist who appeared in the Star Wars films Episode I: The Phantom Menace, Episode II: Attack of the Clones and briefly in Episode III: Revenge of the Sith, along with the animated series Star Wars: The Clone Wars. He will appear in Disney Infinity: 3.0 Edition, and will be in the Twilight of the Republic Play Set.[1] His role in the Play Set is a mission giver.[2]

Jar Jar Binks appeared in the films Star Wars Episode I: The Phantom Menace, Star Wars Episode II: Attack of the Clones and Star Wars Episode III: Revenge of the Sith and also appeared numerous times in Star Wars: The Clone Wars. He lived on the planet of Naboo in the underwater city called Otoh Gunga, until he was banished because he was clumsy. He was saved by Qui-Gon Jinn during the Invasion of Naboo and joined him along with Obi-Wan Kenobi, Anakin Skywalker, Padmé Amidala, and others. Jar Jar was a general in the Battle of Naboo. He later became a Senator of the Galactic Republic, and it was he who gave Palpatine the emergency powers required to create a Grand Army of the Republic.

Jar Jar Binks will appear as a mission giver in the Twilight of the Republic Play Set, where he is seen on Naboo.

He also appears as a cameo in the Rise Against the Empire Play Set. He is seen inside Jabba's Palace, frozen in carbonite.

Jar Jar in a panic

Jar Jar's cameo in the Rise Against the Empire Play Set. 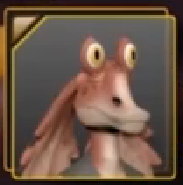 Add a photo to this gallery

Retrieved from "https://disneyinfinity.fandom.com/wiki/Jar_Jar_Binks?oldid=107285"
Community content is available under CC-BY-SA unless otherwise noted.