Jeff Bunker is the former art director of Avalanche Software (a position he held for over twenty years)[2][3] and the former creative director of the Disney Infinity series.[1] His job was to oversee the overall design of the game and its accompanying Figures and make sure everything belonged to the same unifying "Infinitized" art style.[4][1] He stayed with the company until it closed its doors in 2016. 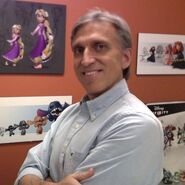 Bunker being interviewed by FamilyGamerTV's Andy Robertson.
Add a photo to this gallery

Retrieved from "https://disneyinfinity.fandom.com/wiki/Jeff_Bunker?oldid=119024"
Community content is available under CC-BY-SA unless otherwise noted.