Kanan Jarrus is a character from the Lucasfilm Ltd. Star Wars Rebels TV series. He may be used in:

He is Force-sensitive, and was officially announced the 12th of June alongside the other Star Wars Rebels characters. He was a timed exclusive to WalMart. [2][3]

The team at Disney Interactive knew from the very beginning of the development of Disney Infinity 3.0 that they wanted to add Characters from Star Wars Rebels into the game, and work began on the creation of those characters before the first episode of the series ever even aired.[4]

For more quotes from this character, see Kanan Jarrus/Quotes. 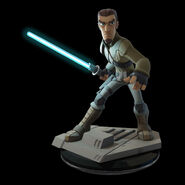 Retrieved from "https://disneyinfinity.fandom.com/wiki/Kanan_Jarrus?oldid=144027"
Community content is available under CC-BY-SA unless otherwise noted.