King Candy's Dessert Toppings is a Power Disc for Disney INFINITY. It is a terrain based on the Sugar Rush game from the film Wreck-It Ralph. It is part of the first series of Power Discs. It turns solid surfaces and plants into candy. It was also released separately and along with the Sugar Rush Sky skydome disc in the Toy Box Pack featuring Vanellope von Schweetz and Wreck-It Ralph. Its Skydome counterpart is Sugar Rush Sky.

Make your world look like Sugar Rush with these objects from Wreck-It Ralph.

A toy box decorated with the customizations. 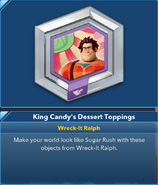 Hall of Heroes Image from Version 3.0
Add a photo to this gallery
Retrieved from "https://disneyinfinity.fandom.com/wiki/King_Candy%27s_Dessert_Toppings?oldid=129178"
Community content is available under CC-BY-SA unless otherwise noted.