Kylo Ren (alias of Ben Solo) is a character from the Lucasfilm Ltd. Star Wars: The Force Awakens. He may be used in:

He was originally leaked as a playable character on October 12th, but was revealed officially later that day. He is the final boss in the Star Wars: The Force Awakens Play Set. On April 5, 2016, a Light FX variant of him was released.

According to animator Nigel Style, the team had very little information on Kylo Ren when they began to animate him. The only things they had to go on were a glimpse of his back from the movie's teaser trailer, a couple of costume fitting videos, and some cryptic statements from higher ups ("Think of the Hound from Game of Thrones", and "He's not as good as he thinks he is"). For this reason, Nigel had to search everywhere he could for inspiration for the character's moveset. He used everything he could find, including videos of Chinese Military sword drills, Star Wars fanfilms, and Lightsaber Academy videos on YouTube. He tried to make the moveset different from that of any other Disney Infinity character.[2]

For more quotes from this character, see Kylo Ren/Quotes. 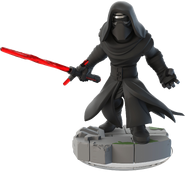 Retrieved from "https://disneyinfinity.fandom.com/wiki/Kylo_Ren?oldid=147645"
Community content is available under CC-BY-SA unless otherwise noted.