Start a Wiki
The Lightsaber is a pack first featured in Disney Infinity 1.0. It originates from Star Wars, and is used as a weapon.

The Lightsaber can be used as a weapon in the Toy Box of Disney Infinity. It is unlocked when all of the figures in the Hall of Heroes are at least level 1, meaning there is a statue is on each pedestal. A cinematic will play of the lightsaber rising out of the center and waving around. After you leave the Hall of Heroes, you can equip it.

In Disney Infinity 3.0, it becomes available from the Toy Store by completing any Star Wars Play Set, but requires a update to get before it unlocks.

Jack Skellington with the lightsaber. 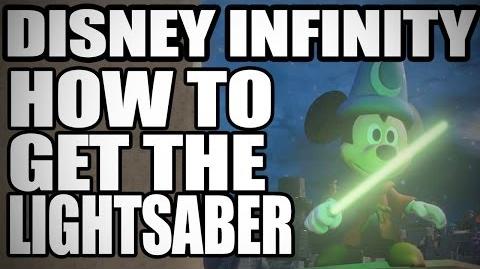