Start a Wiki
"Luke suits up in classic X-wing flight gear to take the action to the Empire!"

It also grants players the ability to collect sparks, (only sparks, the ability does not work for other items such as crops and loot) from farther away than they normally could, which it does for any character who uses it. It was revealed on Toy Box TV Live. 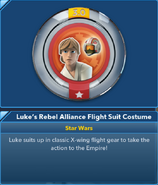 Luke wearing the outfit
Add a photo to this gallery
Retrieved from "https://disneyinfinity.fandom.com/wiki/Luke%27s_Rebel_Alliance_Flight_Suit_Costume?oldid=134666"
Community content is available under CC-BY-SA unless otherwise noted.