Luke Skywalker (aka Commander Skywalker, Kid (by Han Solo), Young Skywalker, Master Luke (by C-3PO), Red 5, Rogue Leader) is a character from the Lucasfilm Star Wars film series. He may be used in:

He is sold along with the Star Wars: Rise Against the Empire Play Set, which was released on September 29, 2015 in the US.[3][4] He was confirmed to be playable on Toy Box TV.[5] Luke Skywalker is also a Crossover Character, and can be used in any of the Star Wars play sets, once his Champion Coin has been collected in that set.[6]

Luke has two default weapons in the game: his lightsaber and his blaster. He is also Force-sensitive, and as such possesses all basic Force-related abilities, as well as some additional Force abilities available from his Skill Tree. These include the ability to deflect blaster shots with his lightsaber, a Force pull, and a lightsaber counterattack. Luke also has a Force Finisher, called Power of the Force, which causes him to lift enemies into the air with the Force and then blast them repeatedly with his blaster. Some of his other Skill Tree abilities include a Block Breaker, an Air Assault, and a Super Jump. Luke's Force Ability is Force Focus, which causes him to hold his lightsaber above his head, create a wave of Force energy that surges out in all directions like a ripple in a puddle, and then hold his supercharged lightsaber out in front of him; when Luke is in this state, every time the player presses the button which would normally fire Luke's blaster, Luke instead performs a Shoulder Charge move, and automatically attacks any enemies in the path of this move.

For more quotes from this character, see Luke Skywalker/Quotes. 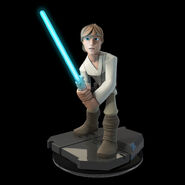 Luke in the Rise Against the Empire Play Set

Retrieved from "https://disneyinfinity.fandom.com/wiki/Luke_Skywalker?oldid=138741"
Community content is available under CC-BY-SA unless otherwise noted.