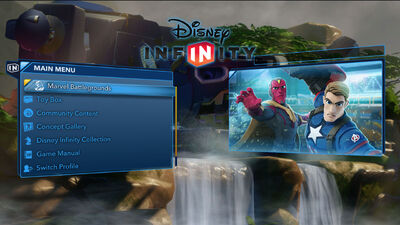 Marvel Battlegrounds was released on March 15, 2016. As a Toy Box Game, it may be used with all Marvel Character Figures.

It was confirmed on Toy Box TV,[1] and is being developed by United Front Games.[2] During D23 Expo, John Vignocchi revealed that it will be the first game to include four-player co-op playing. It was also later confirmed that the game would only include one figure, making it the first single figure game.

Ultron teams up with Loki in an effort to steal Asgard’s immensely powerful Infinity Stone. To accomplish this, Ultron and Loki create robotic replicas of the famed Marvel Super Heroes and turn them against each other in an effort to distract them while they commit their crime. The Marvel Super Heroes duplicates battle each other in iconic environments such as a wrecked Brooklyn train yard, Wakanda (Black Panther's Home Country) and S.H.I.E.L.D.’s Lunar Base, culminating in a universe-shaking battle against Ultron.

All Marvel Playable Characters are able to enter this game.[3]

All round Marvel Power Discs are compatible with this game. The use of these discs are changed however, as they are adapted to the play style. For example, Costume Change discs have been changed to mirror the abilities of team-up power discs.

Hexagonal Power Discs (Marvel or otherwise) are ignored by the game. 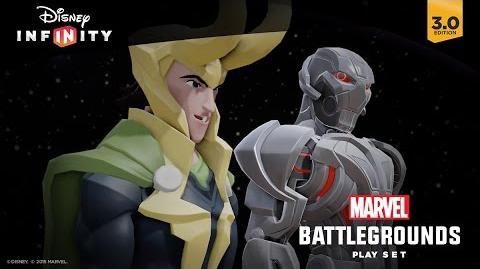