Mickey's Car, also known as Mickey's Jalopy, is a land vehicle that appears in Disney Infinity 1.0. As the name implies, the car is owned by Mickey Mouse. It is part of the first series of Power Discs. Whenever in use in the Toy Box, the Disney Parks Toon Town version of "Steamboat Willie" plays in the background, with the exception of the Wii version (which plays "The Mickey Mouse Club March").

Strangely, like many 1.0 disc vehicles, the music doesn't play in 2.0. But fixed in 3.0, along with the starting up sound.

In the tutorial for 3.0, the player gets to drive the car in a introduction to driving via a race against Donald Duck. One may note that Mickey Mouse and Minnie Mouse both ride in the car, but this is not possible inside the Toy Box. 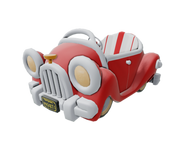 Driven by Buzz Lightyear.
Add a photo to this gallery
Retrieved from "https://disneyinfinity.fandom.com/wiki/Mickey%27s_Car?oldid=130893"
Community content is available under CC-BY-SA unless otherwise noted.