"You have all your packs and tools to help you release the townspeople caught in the snow globes before the Omnidroids smash them."

Mr. Incredible, the Hero is Mr. Incredible's multi player Character Adventure in Disney Infinity 1.0. Characters from Cars cannot be used in this Adventure.

The goal is to rescue costumed citizens from Safety Domes by smashing them within the time limit. The domes are guarded by Omnidroids, and the routes between them are guarded by Pop Up Turrets.

If surrounded by Omnidroids, one effective way to deal with both them and the domes is to use AoE (Area of Effect) attacks, such as "Ground Pound" (jump, then hit attack button) or Mr. Incredible's default ranged attack "Super Ground Smash" (right trigger) to attack both at the same time. 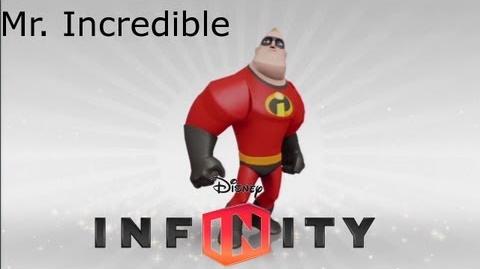 Mr Incredible, the Hero -Disney Infinity-
Add a photo to this gallery
Retrieved from "https://disneyinfinity.fandom.com/wiki/Mr._Incredible,_the_Hero?oldid=134792"
Community content is available under CC-BY-SA unless otherwise noted.