Nova (aka Captain Bucket-Head) (alias Samuel "Sam" Alexander) is a character from the Marvel Spider-Man series. He may be used in:

He was showcased at E3, and is playable in the Spider-Man Play Set. He is included alongside Spider-Man in the play set pack. Nova is also a Crossover Character, and can be used in any of the Marvel play sets, once all ten (10) of his Crossover Coins have been collected in that set .

Nova shoots Energy Blasts for his ranged attack, which can be upgraded to both be charged and shot from both hands. His melee combo consists of strong punches, kicks, and energy blasts. Nova has the Flight ability.

Nova's Skill Tree is, like all the other playable characters', divided into branches, that improve different abilities. Following is a list of all the upgrades in the four different branches in Nova's Skill Tree, plus the 2 Respenders.

For more quotes from this character, see Nova/Quotes. 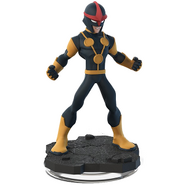 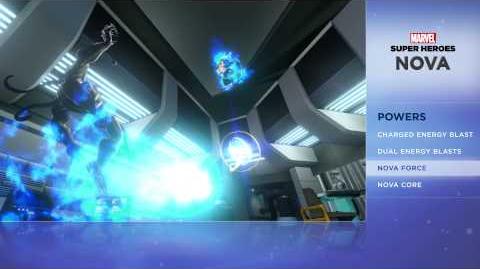 Retrieved from "https://disneyinfinity.fandom.com/wiki/Nova?oldid=138726"
Community content is available under CC-BY-SA unless otherwise noted.