Start a Wiki
Are you looking for Ben Kenobi (Cast Member)?

Obi-Wan Kenobi (aka Ben Kenobi, Master Kenobi, General Kenobi) is a character from the Lucasfilm Star Wars film series. He may be used in:

He was released at launch.[4] He was confirmed playable on Toy Box TV,[5] but was first seen on the leaked image of the box art of Disney Infinity 3.0. Obi-Wan Kenobi is also a Crossover Character, and can be used in any of the Star Wars play sets, once his Champion Coin has been collected in that set.[6]

Obi-Wan's fighting style is more refined than that of other playable Jedi in the game. [7] He is Force-sensitive, and as such, he possesses all basic Force abilities, as well as others that are accessed via his Skill Tree. These include a lightsaber counterattack, a special jumping lightsaber attack called Doubling Down, a stun move called Power of the Force, and an ability called Force Confusion which causes some enemies to attack other enemies instead of the player. He also has a Super Jump, a Block Breaker, and an Air Assault.

While the team knew all along that they were going to do the younger version of Obi-Wan, they also wanted to incorporate his older self into the game. They wanted to make him playable, but they couldn't decide whether they wanted him to be a costume change Power Disc or a playable character. Eventually, they simply scrapped the idea and made him a Cast Member (NPC) instead.[8]

For more quotes from this character, see Obi-Wan Kenobi/Quotes. 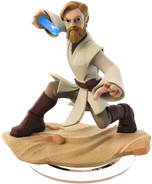 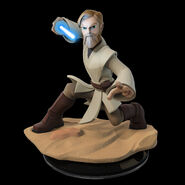 Retrieved from "https://disneyinfinity.fandom.com/wiki/Obi-Wan_Kenobi?oldid=138737"
Community content is available under CC-BY-SA unless otherwise noted.